How Much Does it Cost to Divorce in North Carolina?

How Much Does it Cost to Divorce in North Carolina?

What Is The Cost of Collaborative Divorce?

Divorces are expensive. But don’t take our word for it. Here are a few true stories.

The couple owned a large marital estate—approximately $2 million. The court awarded each about $1 million. While that may sound like a lot of money, they spent nearly 25% of their entire net worth (23 years of life savings) on divorce litigation.

Not all litigated divorces cost half a million dollars. Some cost more. Some cost less. But it is always expensive. Why? Court proceedings involve complex procedures and regulations about documenting legal claims, gathering evidence for trial, framing legal issues, and presenting the case to a judge. It’s not a simple or efficient process. It is also timely, requiring hundreds of attorney hours to prepare and present a case. Those hours result in large legal bills for clients. Unfortunately, most people discover these fees do not translate into creating a high-quality process for resolving conflict. Ask anyone who’s gone through a costly divorce.

Divorce mediation in North Carolina is typically a settlement procedure, in which the attorneys representing the two spouses decide to involve a third party, “neutral” attorney, or mediator, to help facilitate the settlement negotiations. Some attorneys recommend divorce mediation as an alternative way to reduce the cost of litigation.

Here’s the kicker with mediation. Conflicted spouses each pay for their legal representation and they have the extra fee of a third attorney to serve as the mediator. The desired goal is to settle the case before it reaches litigation and a court judge. In the successful cases, the parties usually end up saving enough in reduced legal fees to make it cost-effective to pay the mediator.

Mediation, however, is still an unnecessarily expensive approach. The process follows the same legal procedures as a court litigated divorce. In other words, mediation is also inefficient, complex and costly. In fact, most divorce mediation in North Carolina occur after a lawsuit has been filed. And it is not unusual for mediation divorces to cost $50,000-$100,000. 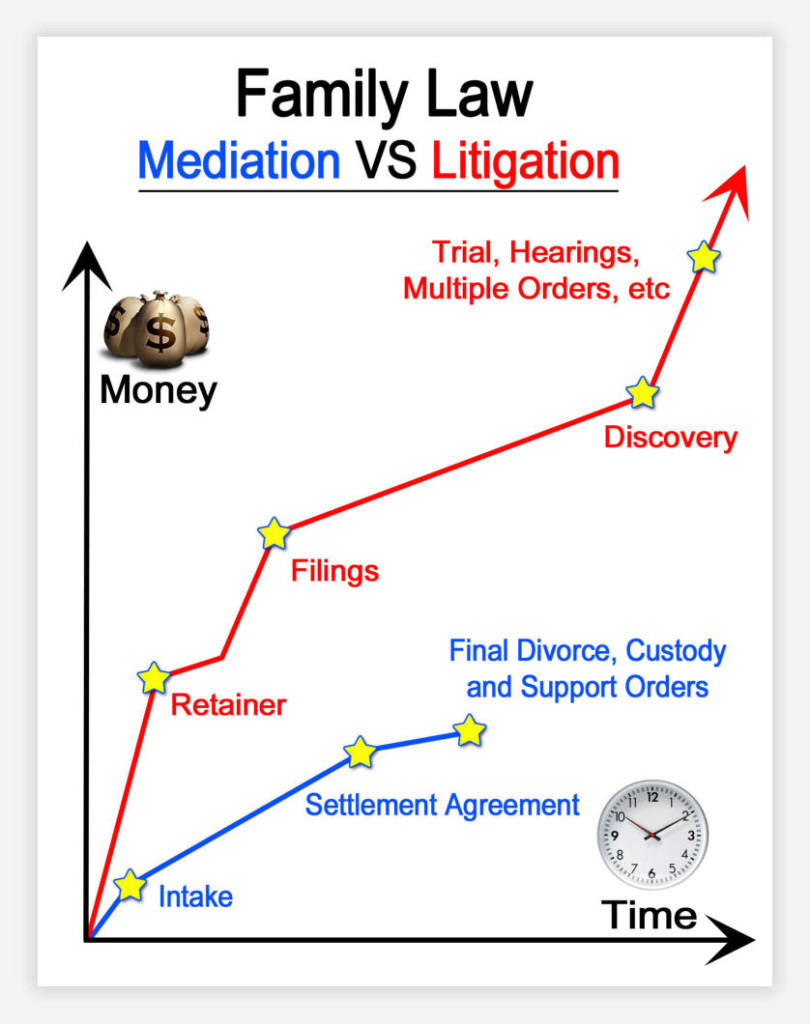 Learn more about collaborative divorce and determine whether it is an option for you.

I want you to know how much I appreciate your steady hand and guidance throughout this whole matter.

Thank you Mark! You don’t know how much I have appreciated you during this process! I don’t know what I would have done without you on my side!

Thanks for all your help in making this difficult transition in my life as smooth as possible.

I wanted to take the time to personally thank each of you for marshaling us through the negotiation process. This was one of the most difficult things I have ever gone through and I know it was extremely difficult for Veronica too. I am hoping going through the Collaborative process will give us a better chance at as good of a relationship as possible for the sake of the children.

I wholeheartedly thank you both for your guidance during our separation. For a year now, things have been running mostly very smoothly (especially regarding the children), and a big reason for that is that you both helped set the tone for how Jeff & I should behave (respectfully). We know how much our words and actions affect our daughters.

I have always been extremely happy that we went the collaborative divorce route–absolutely no regrets there. I think it’s by far the healthiest way for a couple to divorce when children are involved.

It was so good to talk with you. I have never forgotten how much you helped me those many years ago. I am glad you are still helping people.